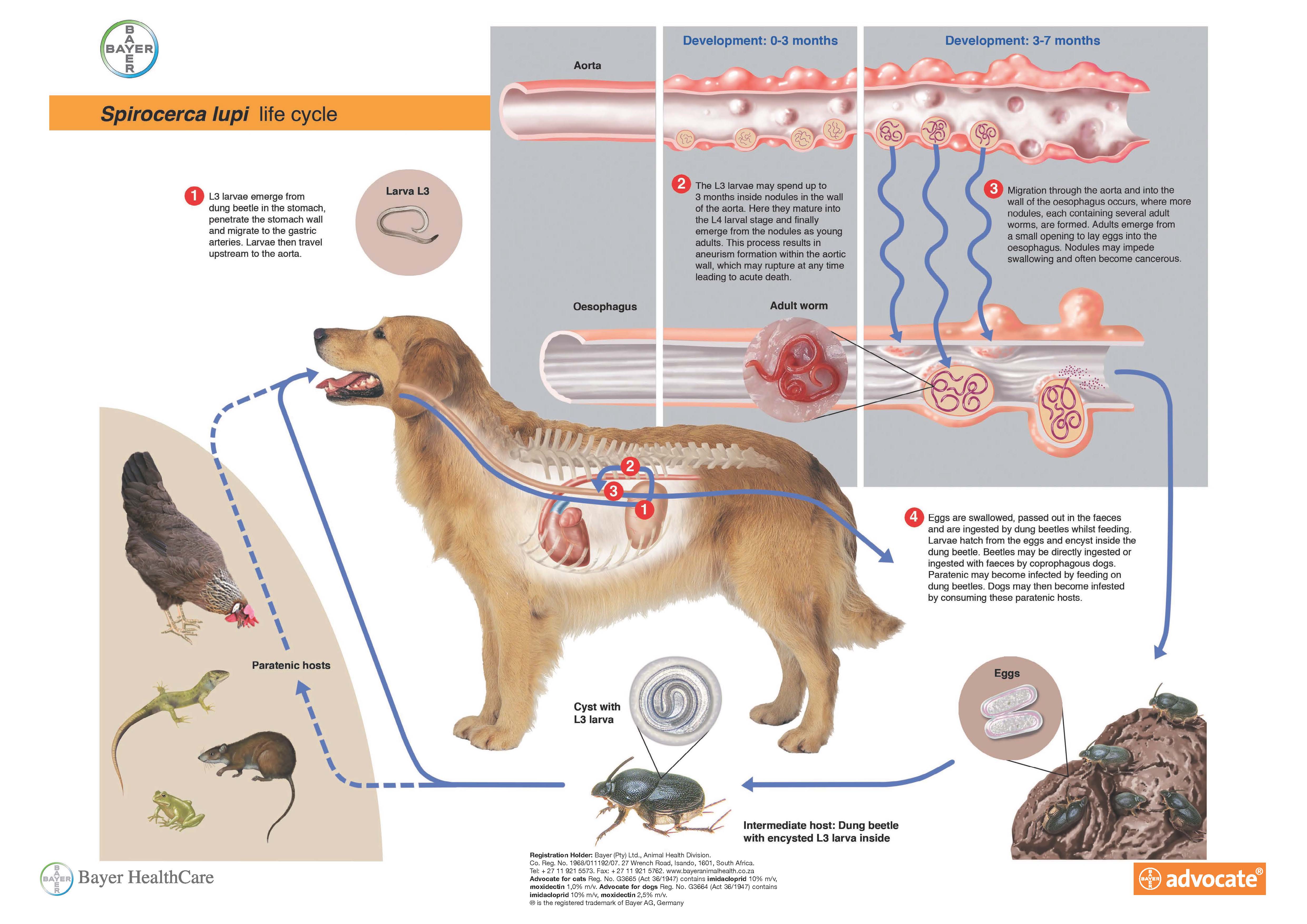 A little worm is causing a lot of trouble and pet owner’s should be aware of the fact that the disease is better prevented than treated!
Spirocircosis is often referred to as “The silent killer”, as patients can suddenly die without any pre-existing symptoms!
The problem is, that in the mind’s of people, worms are treatable and not life-threatening – unfortunately this does NOT ring true for Spirocerca Lupi.

Is it a new disease?

It is one of the most researched veterinary diseases of our time – only as recent as 2000 being recognised as a disease – as yet unfortunately there are no blood tests yet to diagnose it and diagnoses is often “touch and go”, as well as treatment being ineffective, as soon as symptoms have already appeared.
Regurgitation – the most recognised symptom of the disease has been diagnosed since early veterinary medicine – who knows – maybe a lot of those cases were Spirocercosis.

It is now recognised in many tropical and sub-tropical countries worldwide.

Spirocerca Lupi is a worm that lives in nodules (nests) in the oesophagus of dogs, from where eggs are excreted through the dog’s stooles – the worms can survive in the oesophagus up to two years.
Dung Beetles then eat the dog’s faeces, ingesting the Sprirocerca eggs, which develop in the Dung beetle into larvae.
Dog’s are infected by these larvae either by eating the dung beetle directly or eating a host that has eaten the dung beetle like birds, rodents, lizards, etc.
These Larvae after being ingested, have the ability to move through the stomach wall and move through blood vessels into various locations in a dog’s body – these account for some of the painful symptoms we sometimes pick up in patients . In the large blood vessel leaving the heart – the Aorta – the larvae mature into young adults – here they can cause a weakening of the blood vessel – an aneurysm, which can burst without fore-warning and result in sudden death.
The young adult worms then migrate to the oesophagus, where eggs are laid in nests ( nodules not much bigger than “jelly-tots”).

These nests account for the most common symptoms we see as Veterinarians, namely an inability of the patient to swallow food.
Owners often think the dog is vomiting, it is actually an inability to swallow and food comes up again after an attempt to eat (medically termed regurgitation).
Treatment is aimed at killing the worms and reducing the size of the nest – easier said than done, as these nests are prone to becoming cancerous, due to the constant irritation of food and stomach acid moving up and down.
Patients lose weight rapidly and remain very hungry.
Unfortunately, very often there are other painful symptoms, which the migrating worms cause e.g lameness and thickening of the bones of the forelimbs.

Diagnosis is made on presence of symptoms, x-rays and endoscopic examination.
Although it can be diagnosed on stoole samples, there are often false negatives, as not all stoole samples would contain eggs.

Treatment – if the nest’s have not become cancerous, is long – an initial weekly injection of a specific active ingredient (Doramectin) for 6 weeks and life-long.
After initial treatment the condition must be contained by a monthly application of a spot-on product (Advocate) or oral tablet (Milbemycin) – these are also the two products of choice to prevent the disease.
All other pets in the household will need to be treated, as eggs are retched up too, and dog’s often eat the vomitus of other dogs.
Treatment is often much more involved than just weekly injections – patients often need additional antibiotics, ant-acids, soft highly nutritious diets and need to be fed small regular meals from a height.
Even with the weekly 6 week long injections, many patients do not recover from this fateful disease.

So the next time your Veterinarian say’s your dog has a worm – PLEASE take it seriously – it might not JUST BE A WORM!

And more importantly, as with soooooo many other diseases PREVENTION IS BETTER THAN CURE!